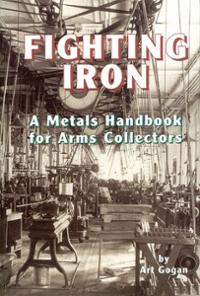 What is the difference between a Damascus knife and a Damascus shotgun? Why did barrel composition contribute to the short lifespan of the 6mm Lee Navy concept? Why did high-grade flintlocks use platinum touchhole sleeves? Why are early Rock Island Arsenal M1903 receivers considered potentially dangerous? Sooner or later, any gun collector is going to wind up with a question like these, and find himself in need of a basic education metallurgy. Well, Art Gogan has you covered, with Fighting Iron: A Metals Handbook for Arms Collectors

There are not many other sources of this type of information short of all-out college textbooks, and Gogan has done a great job compiling a quite readable history and description of the metals that apply to the world of arms, primarily firearms. As one might expect, this is primarily iron and steel – but there is information on virtually every other element and alloy that came in contact with weaponry – copper, brass, bronze, gold, silver, lead, tin, and more. The book is aimed at more historical collectors, and does not include the more recent developments, such as use of aluminum, titanium, or scandium alloys. Not many weapons made from those materials are considered collectible yet, though.

For me, the most useful section of the book was the history of how iron has been alloyed into steel over time, dating back to the beginning of the Iron Age. It was only relatively recently that metalsmiths have been able to accurately measure the component elements of a particular steel, and before that the terminology used could be baffling. Fluid steel, cast steel, silver steel, decarbonized steel – the list goes on, and that’s without including steels that were simply named for their geographic origin. What is the difference between Toledo steel, German steel, Swedish steel, and British steel? Even a serious textbook probably won’t tell you that, but Fighting Iron does.

As a practical example, consider this stamping:

The “Krupp Essen” part is understood easily enough; Krupp was one of the largest steel producers in the world and located in the city of Essen. But what does Fluid Steel mean? Well, it is the name given to a specific production method, and it can help us date the gun in question. In the 1850s an Englishman named Henry Bessemer was granted a patent for a fast and automated method of removing carbon and slag from pig iron, creating a very clean raw steel that could be then alloyed to whatever specification a producer desired. The process involved blowing high-pressure air through molten pig iron, and while it worked well, it often resulted in air bubbles left in the solidified end product. To solve this problem, another Englishman named Sir Joseph Whitworth (yes, the man behind the Whitworth rifle) developed a hydraulic press to compress the Bessemer process steel as it cooled, thus collapsing any internal voids it might contain. Whitworth’s method became known as fluid steel because of the hydraulic means of applying pressure, and it was adopted by Krupp, among others. As always eventually happens, fluid steel was eventually superceded by better processes, and was not used after about 1920. That gives us a time frame for a gun like the one pictured above – it could have been made no earlier than the late 1850s and no later then the 1920s.

This, and much more occasionally-instrumental knowledge can be yours with a thorough reading of Art Gogan’s “Fighting Iron”! It was published in 1999 and is still easily accessible through the publisher (Mowbray) or Amazon for the $28 cover price: