The Czech ZH29 is a meticulously made example of early semiautomatic rifle design. Made in the era before WWII when great care was taken in making arms, the only stamped parts on it are the buttplate, mag body, and mag floorplate – everything else is a machined part. Unfortunately, this carried over into the rifle’s price, which helps explain its limited commercial success. It was offered for sale in 7.92, 7.62, 7, and 6.5mm cartridges, but the only significant contracts were from Ethiopia (Abyssinia, as it was known at the time) and China.

The ZH29 had several unusual features, even by today’s standards. The bolt locked into the left side of the receiver, as opposed to the top or symmetrically into both sides. The barrel was fixed slightly out of square with the receiver, though it is not immediately obvious with the continuous shroud over it. However, you can see that the rear sight is offset to one side, while the front sight is centered on the barrel.

The magazine catch was another interesting but expensive feature. Like most magazines of the time, the ZH29 mag locked in place with a front lip and rear catch. However, the front lip was held in place by two spring-loaded pieces, so new magazines could be pushed straight into the magazine well, instead of the typical “nose in, rock back” motion normal for mags with rear catches.

The bolt holdopen was also unusual – it was integrated into the hammer mechanism. The magazine follower would block the bolt from closing after the last shot was fired, and the hammer would lock into a cutout on the bottom of the bolt. Once a new magazine was inserted, the bolt would be released by pulling the trigger. A second pull would fire a shot. 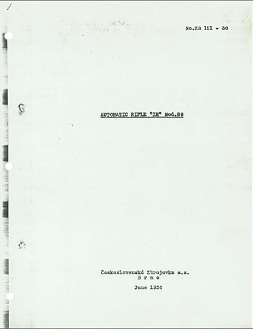